The Florida scrub jay is endangered 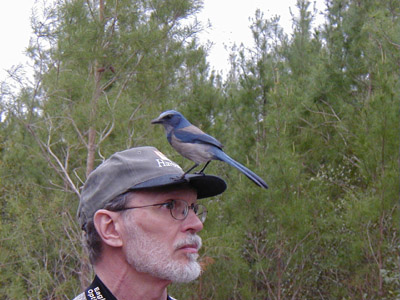 but not shy. We had walked for about 1/2 an hour along the paths where the scrub jays were supposed to be, and were headed back, when one alighted in a tree very near us. As I was pulling up the camera to get a photo, another one flew in and landed on Judy's head, then flew over to my head where he proceeded to peck at the button on top of my cap. I was able to pass the camera to Pat without disturbing him, and she took 4 pictures before he flew off again. He stayed on my cap of a couple of minutes! For a while he was facing away from Pat, so I turned around for one last photo.

The glossy ibis was new to us. This one was at a wetlands near Deland.
The regular ibises were too numerous to count. (below)

A Sand Hill Crane
The same bird in flight

Light was failing when we arrived at the Blue Heron wetlands outside Titusville, but this wood stork made his home near the entrance. We also saw a sand hill crane pair with a chick and a roseated spoonbill there. Too dark for photos.

Biker Week in Daytona and a Warbirds Air Show in Titusville filled all the better housing in Titusville, so we ended up at the Indian River House in Cocoa. It turned out to be a lovely place in a quieter smaller town, but with a couple of good restuarants.

On Sunday we attended the Unitarian-Universalist church in Titusville. This small lay-led church also hosts a coven of UU pagans (CUUPs) and a Buddhist temple - diversity we lack in Cleveland.

Return to our home page